World of Cars Wiki
Register
Don't have an account?
Sign In
Advertisement
in: Places and Locations, Radiator Springs buildings
English

Flo's V8 Café is a car café for drinking oil and gas, owned by Flo in Radiator Springs. Most residents of Radiator Springs visit there for a drink once in a while, and to chat. It is shaped like a real V8 engine.

In Cars, Flo's V8 Café was introduced as the main place for town meetings. It is one of the main buisnesses of Radiator Springs, and the only gas station from miles around.

Flo's V8 Café first appeared when Lightning McQueen was being chased by Sheriff. Flo, Ramone, Sarge, and Fillmore were there, lonely, and Sarge and Fillmore were watching the traffic light. Then, they heard Sheriff backfiring, so they peaked to see what was going on. They all watched Lightning wreck Radiator Springs, still from Flo's.

When Lightning was fixing the road with Bessie, Fillmore and Sarge were at Flo's V8 Café, and then Sheriff came. A few minutes later, when Van and Minny came into town, Flo tried to get them to stop at Flo's V8 Café, but they didn't want to, because they "just topped off."

Later, Lightning was scrapping the bumpy road that he paved earlier, and Ramone, Sarge, Fillmore, Flo, and Mater were watching him work from Flo's V8 Café.

2 days later, everyone went to Flo's to get some fuel. There, Lightning tried to tell everyone that Doc was a famous racecar, but nobody believed him (and Doc was watching from his garage). Then, Sally refilled Lightning's gas tank all the way, because she trusted him. However, Sheriff was worried that he will run away. Sally decides to take Lightning for a drive. At first, he decides on running away, but then decides to follow Sally.

The next day, at night, all the neon lights were finally fixed, including Flo's.

In Cars: The Video Game, Flo's V8 Café is now the popular location, due to the fact that there are now people driving in Radiator Springs. Often times, some cars that are driving on the road will stop under one of the stalls and get gas. It also seems to be the place to find Fletcher, Gerald, El Guapo and Papo.

In Cars: Mater-National Championship, Flo's is still the most successful building in the town, and life before cars will often stop there.

In the Cars Toons, Flo's is often seen while the townies are drinking their oil cans there. Also, Mater often tells his stories there.

In Cars 2, Flo's seems to have gotten brighter paint and is even more popular, with tons of cars visiting for the World Grand Prix. Because Cars 2 didn't mainly happen in Radiator Springs, it didn't appear as many times as it did in Cars. Its only major appearance was when everyone was at Flo's, listening to Mater's story about being a spy.

"Cruise on in to Flo's V8 Café and fill up your tank on classic American cuisine with a new spin. Inspired by the timeless drive-up diners along Route 66, Flo's V8 Café celebrates the pioneering spirit of the open road. If you're looking for the most popular restaurant in all of Carburetor County, just head towards the signature 27-foot-tall neon V8 sign!"

"Get your engines revving in the morning with breakfast favorites like chicken tamales with scrambled eggs or French toast served with salted caramel and bananas. For lunch, try inventive cuisine like Veggie-Tater Bake or indulge in home-style rotisserie classics including pork loin, citrus turkey and New York strip loin. Top off your meal with delicious single-serve fruit pies including apple-cheddar and cherry flavors!"

"The food at Flo's is only half the fun! From both the huge glass windows of the interior dining area and the open-air patio, you can take in the majestic mountains and expanses of Ornament Valley — and even watch cars speed past on Radiator Springs Racers.

While you're eating and enjoying the view, be sure to look around to see the mementos from the singing career of the café owner, Flo from the Disney·Pixar movie Cars. Another section of the dining area is a museum that showcases the racing career of Cars legend Doc Hudson."

The main building is circular-shaped, painted yellow and green with the logo on top. On either side, it has two narrow buildings, holding three cars who need gas on each side. 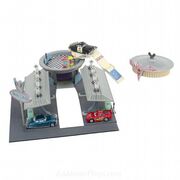 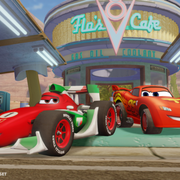