Flo is a resident of Radiator Springs and Ramone's wife.

Flo first arrived in Radiator Springs as a touring Motorama girl. She was headed west with a transport of models when her chaperone blew her transmission just outside of town. Flo and the other Motorama girls spent an unforgettable weekend in Radiator Springs; new tires from Luigi, souvenirs from Lizzie, and a new paint job from Ramone. But when it came time to paint Flo, Ramone threw down his airbrush. Not because he was too good to paint her, but because she was too good to paint. The next day when the girls left, Flo stayed. She and Ramone have been together ever since.

She first appears in the first video game in the cut-scene for Sally's Sunshine Circuit, where she decides to join the race with Sally, Mia, and Tia. Then she appears in the race. Usually, she comes in last place.

Flo later reappeared in Cars 2, only with a minor role of greeting Lightning McQueen when he comes back to Radiator Springs. She also sees him off at the airport when he leaves. When McQueen calls her and the rest of the Radiator Springs citizens she comes to London. She also helps fights the lemons by hurting Vladimir Trunkov's eyes using her bright headlights. Back in Radiator Springs, she notes the big dent that Holley Shiftwell has in her rear fender and offers her husband's services to sort it out which Holley kindly declines, stating that the dent is "Too valuable." At the end, she and Sally admire Francesco Bernoulli's open wheels.

Flo is nice and kind, but can sometimes be a little sassy.

Flo is painted light green, with cream stripes on her sides and long fins on her rear.

Flo is simply based on a Motorama Show Girl.

She is modeled after a 1957 GM Motorama Show Car.

Her license plate reads "SHO GRL", a reference to the fact that she was a show girl before she came to Radiator Springs.

Flo owns the local gas station, appropriately titled Flo's V8 Cafe. The restaurant appears to be the main building in Radiator Springs, where all of the residents talk together while having a drink or two,

"Good to have you back, honey!"
—Flo welcoming Lightning McQueen back home. 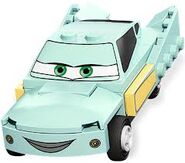 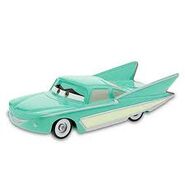 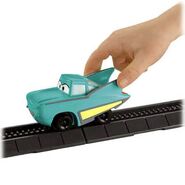 Retrieved from "https://worldofcarsdrivein.fandom.com/wiki/Flo?oldid=55115"
Community content is available under CC-BY-SA unless otherwise noted.