The Florida 500 is a Piston Cup event in Cars 3. With the goal of defeating Jackson Storm and other rookies in the race, Lightning McQueen receives assistance from racing instructor Cruz Ramirez during his training for the event.[1] Cruz will take Lightning's place half through the race, because Lightning decided he could not win this alone.

Jackson takes the lead for most of the race, while Lightning steadily passes other cars. When he overhears Sterling tell Cruz to leave, that makes Lightning have an idea. Lightning knew he could not win alone, so after a wreck on the track caused by Cam Spinner, he had Ramone paint the Rust-eze and number 95 on Cruz to follow race regulations.

Storm initially takes Cruz as a joke and therefore pays no attention to her. When the green flag drops, Cruz initially struggles, but eventually starts making up ground. As the race progresses, Cruz starts outperforming the other cars. When there is just 10 laps left, Cruz moves into the top 10. Jackson's crew chief warns him about this, but he does not care. When Cruz moves into fourth position, Storm starts to take notice of her. When she moves into third position, Storm starts becoming scared of her, so he purposely slows down to catch up to Cruz, allowing Daniel Swervez to take the lead. Storm tells her that she can play dress up all she wants, but that she will never be a racer before retaking the lead. While in shock, Cruz moves back to fifth position after Flip Dover and Chase Racelott pass her. Cruz tells McQueen that Storm is in her head, but McQueen tells her that she got in Storm's head because he would not have done that if she did not scare him, and that she really was a racer. During the final lap of the race Ramirez is right in Storm's tail and Storm tries to prevent her from passing by pushing her up against the wall. Unfortunately for Storm, Cruz does a flip over him and crosses the finish line in first place. After winning, Cruz is congratulated by Daniel Swervez, Chase Racelott, Ryan Laney, and Bubba Wheelhouse, Jr..

(Note: The six racers listed after Cruz Ramirez did continue the race after the restart, but disappeared as the restart happened and re-appeared a short while later.) 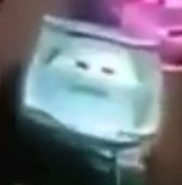 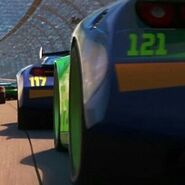 Add a photo to this gallery
Trivia

Retrieved from "https://worldofcarsdrivein.fandom.com/wiki/Florida_500?oldid=137387"
Community content is available under CC-BY-SA unless otherwise noted.