Forksworth is the ultimate gentleplane's assistant. He has been with Bulldog for decades and taught the British racer everything he knows about etiquette, both on and off the course.

In Planes, Forksworth can be seen in Bulldog's tent while Dusty is meeting the other WATG competitors. When Bulldog begins making fun of El Chupacabra, Forksworth and the other pitties laugh alongside him.

Forksworth is painted blue and gray, with red rims and gray forklift arms also number 11 in his both sides.

Forksworth is the head pitty of Bulldog's racing team. 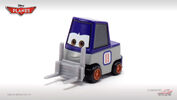