Fred Pacer (or Fred Fisbowski) is criminalist and member of Pacer family.

Fred missed his early days growing up in Kenosha. Back then, he didn't have to worry about being the toughest Lemon on the block, or where he would get his spare parts. All he had to think about was kicking back and relaxing with fellow Pacers and Gremlins. As time went on, the factory parts dried up in his hometown, and Fred had to look for new adventures in faraway places. That led him to sign up for work on a mysterious oil rig in the deep Pacific. As long as the pay is steady and the parts don't dry up, Fred Fisbowski is not complaining.

Fred was a yellow Pacer car who was part of the Pacer family that works with Professor Z. In Cars 2, Fred was seen in the background of the scene where Professor Z tests his camera weapon on Rod Redline. He was also seen fighting Finn McMissile in a back alley in Tokyo, Japan. Later he was thrown into an elevator by McMissile, that violently lifted and crashed with its roof, crushing Fred, leading to his death. Later, as Tow Mater leaves, Finn, watching above from the top of the elevator, is next to Fred Fisbowski on the left, implying that Finn moved Fred's corpse along with unnamed Trunkov.

In the intro to Cars 2: The Video Game, he or another yellow Pacer was with a flamethrower and about to kill Finn McMissile, but then Mater came and freed Finn, then Finn bashed into Fred and a few other lemons. Then those lemons chased Finn and Mater up the spiral thing. Then in the round tunnel, lemons from both in front and behind him were coming to him about to crash him. Fred was behind him. Then Finn drove upside down in the tunnel and away from the lemons, causing the lemons to crash into each other and explode. 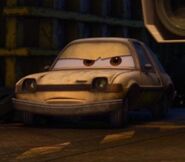 Add a photo to this gallery
Retrieved from "https://worldofcarsdrivein.fandom.com/wiki/Fred_Pacer?oldid=151751"
Community content is available under CC-BY-SA unless otherwise noted.