In Cars 3, George replaces Brian Spark as the current racer for Leak Less after the end of the 2016 season. At the Florida 500, George starts the race in thirteenth. After being hit by Cam Spinner in turn two, he is severely damaged and does not complete the race, placing thirty-fourth with a DNF. 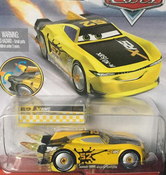 Retrieved from "https://worldofcarsdrivein.fandom.com/wiki/George_New-Win?oldid=180696"
Community content is available under CC-BY-SA unless otherwise noted.