"DEARGGGGGGGGHHHH!"
—One of his lines.

Ginormous is a monster truck who doesn't talk. Instead, he makes growling sounds.

In Cars: The Video Game, Ginormous is a monster truck who wanted to race against Lightning. Ginormous is introduced in Monster Truck Mayhem when he, Count Spatula, and The Crippler challenge Lightning McQueen to a race. Lightning quickly goes to Luigi's Casa Della Tires to get monster truck tires. When he does, he races with the monster trucks.

When Lightning was turned into a monster truck Ginormous and The Crippler got scared, but Count Spatula said McQueen needed the mental fortitude. McQueen later proved them wrong.

Ginormous isn't a playable character and doesn't have other paint jobs.

In Cars Mater-National, Ginormous makes appearances in the Monster Truck Waypoint Races. Again, he is not playable and doesn't have alternative paint jobs.

Ginormous appears in all 5 of the Monster Truck Races in Cars Race-O-Rama, except on the PlayStation 2. On the PlayStation 2, he doesn't appear at all. Like in the first two games, he is not playable and doesn't have alternative paint jobs. 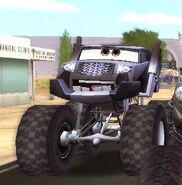 Add a photo to this gallery
Retrieved from "https://worldofcarsdrivein.fandom.com/wiki/Ginormous?oldid=55083"
Community content is available under CC-BY-SA unless otherwise noted.