Guido is a small Italian forklift, who works at Luigi's tire shop as his assistant.

Like his boss Luigi, Guido is an avid Ferrari racing fan who dreams of performing a real pit stop on a real race car. To better prepare himself, he practices tire changes at night on wooden practice frames he built in his garage. One of these days, he hopes to set a new world record for the fastest pit stop of all time. But until that happens, he continues his quest to further enlighten himself. Currently, Guido is reading Tire Changes for the Soul, and Four Tires, One Goal.

Guido isn't just pretty fast with a tire, he's pretty creative with one too, or even with ten.

Guido ultimately realizes his dream when he works on Lightning McQueen's pit crew under the command of Doc Hudson. Guido deals with the derisive attitude of Chick Hicks' pit crew by single-handedly changing McQueen's tires in record time, something not even four experienced pit crewmen could do.

Guido, the little Italian forklift, is the backbone of Casa Della Tires. He's Luigi's assistant and best friend, and together they are the biggest Ferrari racing fans in Carburetor County. A car of few English words other than "pit stop," Guido is a force to be reckoned with when he's changing tires in the pits during a race. Joining Team Lightning McQueen for the World Grand Prix, Guido will get to show off his turbo-charged, pedal-to-the-metal pit stops on the global stage...and maybe, just maybe, he'll see some Ferraris!

In Cars 2, Guido and Luigi tag along with McQueen as his pit crew. He is seen serving drinks at the beginning of the film. He also watches as Mater talks on the Mel Dorado Show. Later in Tokyo, he doesn't believe that Holley Shiftwell is Mater's girlfriend until the end of the film when she says it herself in a jaw-dropping moment. Uncle Topolino reveals that Guido and Luigi used to always fight, and they are seen fighting over a girl car until another girl car comes, and they are both satisfied. He also helps fight the lemons later in the film. He tries to take off the bomb that was attached to Mater, but his drill won't do it and he gets frustrated and leaves.

Guido is usually a background character in Cars Toons. However, he plays as the protagonist in Spinning.

In Cars Land, Guido and Luigi have their own ride at Luigi's Casa Della Tires called Luigi's Flying Tires. In the ride, the guests will get into their own fettucini tires. When Guido turns on the air compressor, air will come out of the holes, and the tires will float in the air. There are also some beach balls with the colors of the Italian flag in the ride, and Italian music will play.

Guido is kind and eager, as he loves to make pit stops. He is also very determined, as he practices every night perfecting his speed.

Guido is painted several different shades of blue, with two gray forklift "arms" built into him.

Guido is based on an Alza Tutto Forklift, inspired by the design of the 1959 BMW Isetta. 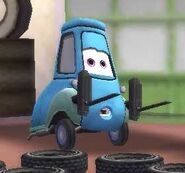 With Franca, Luigi, and Francesca

Guido when he gets sad
GuidoCars.png 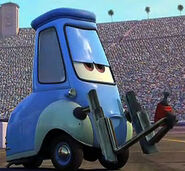 Guido finishes the fastest stop in history of Cars

Guido in The World of Cars Online 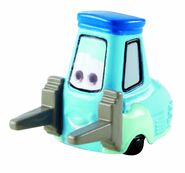 Retrieved from "https://worldofcarsdrivein.fandom.com/wiki/Guido?oldid=56122"
Community content is available under CC-BY-SA unless otherwise noted.