Racing driver
Gus O'Line, known also as The Magnificent Gus O'Line, was a race car that was a racing driver who, in the early 1950s, competed in the Piston Cup Racing Series.

Gus O'Line was a race car who in early 1950s, he competed in the Piston Cup Racing Series. One day, while he and Hudson Hornet were racing bumper to bumper for first place, Gus felt a problem, and after the race, it was discovered that he had dislocated his semi-axis. Realizing his chances of continuing the season are slim, Hudson helped him by repairing his semi-axis, claiming that he learned a trick when he was younger. Gus, impressed with the results, suggested the profession of a doctor for Hudson in the future, but he stated at the time, that it will never happen, but years later he has became a doctor.

Gus was red painted car. He had blue eyes. 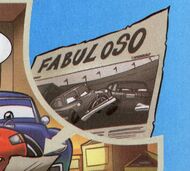