Hamm: "Hey, I hate to break up the road rally, guys, but they're here! Birthday guests at three o'clock!"
Mack: "Oh, man! Whoever does the voice of that piggy truck, I'm tellin' ya, he's one great actor!"
—Hamm's line and Mack's comments 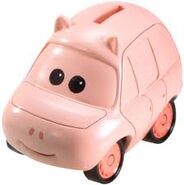 Retrieved from "https://worldofcarsdrivein.fandom.com/wiki/Hamm_Centercut?oldid=36468"
Community content is available under CC-BY-SA unless otherwise noted.