Not to be confused with the tow truck.

Herb Curbler is a next-generation Piston Cup racer in Cars 3. He is currently being sponsored by Faux Wheel Drive and bears the number 54, like Tommy Highbanks.[1]He is colored dark green with tire patterns and dirt-like designs in his body.

Herb competes in the 2016 Piston Cup season in Cars 3. He replaces Tommy Highbanks as the Faux Wheel Drive racer and proves to be a very good opponent. He debuts at Heartland Motor Speedway and finishes in 6th place. At the Los Angeles 500, starting aside to Buck Bearingly. At the start of the race, the two are seen repeatedly passing and dueling with each other. Herb overtakes him permanently at one point. He's likely in the Top Three of the race at one point, until Lightning McQueen passes him, followed by Daniel Swervez. He manages to finish in 9th place. At the Florida 500, he starts in 5th position and stays in the Top 10 for the entire race. Unlike other racers, he isn't involved in the wreck caused by Cam Spinner. He restarts in 6th place. At some point in the race, he pits with Cruz Ramirez who later passes him. He manages to finish the race in 7th place. 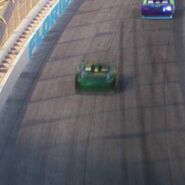 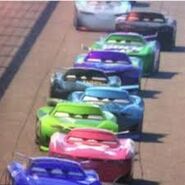 In the restart of the Florida 500

Retrieved from "https://worldofcarsdrivein.fandom.com/wiki/Herb_Curbler_(Piston_Cup_racer)?oldid=138524"
Community content is available under CC-BY-SA unless otherwise noted.