Ishani is a racing competitor that hails from India. She is Dusty's love interest.

The reigning Pan-Asian champion from India with style, Ishani is easy on the eyes, but ruthless in the skies. Thanks to her high-speed competitiveness and notable talent, she has amazed more than a billion loyal fans—including one rookie racer who turns to her for guidance. Exotic and mysterious, Ishani is full of surprises, but always has her eye on the prize.

Ishani is a strong, spirited and talented racer. She is very focused on winning, but this does not mean that she can't care about other racers. Ishani is nice to Dusty Crophopper, and took a liking of him. Ishani was seen talking with Dusty, and he tells her about her propeller. Ishani was seen having a discussion about the next race with Ripslinger in Oil Hall. Ishani took Dusty around Taj Mahal, and gave him advice about using the railroad tracks serving as an iron compass. After Dusty got to Nepal in first place in the wake of nearly getting killed by an oncoming train, Dusty figured out that Ishani conspired against him with Ripslinger when Dusty saw her with a Skyslycer Mark Five propeller that was only used for RPX planes that Ripslinger gave Ishani as compensation for doing his dirty work, Dusty was so mad at Ishani for selling him out that he shuns her for it. Though later on in Mexico, she felt guilty of doing so and redeemed herself, and apologized to Dusty for doing Ripslinger's dirty work. At the end, she gave the propeller to Dusty Crophopper.

Ishani is painted red, orange and yellow with a propeller on her rear tail fin, and elaborate purple and green designs, with a green number 6.

Ishani's design is based on the AeroCanard FG kit aircraft, but with different front wings, a thinner nose, and without the additional side windows. Her wingspan is 32.8 feet (10 meters).

Ishani is a famous air racing champion, hailing from India.

Ishani with a Skyslycer Mark Five propeller for Dusty. 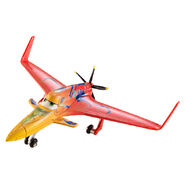 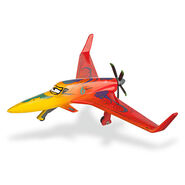 Disney Store
Add a photo to this gallery
Retrieved from "https://worldofcarsdrivein.fandom.com/wiki/Ishani?oldid=50684"
Community content is available under CC-BY-SA unless otherwise noted.