World of Cars Wiki
Register
Don't have an account?
Sign In
Advertisement
in: Trucks, buses, Lemons, Criminals,
and 2 more
English

"Sounds like you need some roadside assistance."
—Ivan, Cars 2

Ivan (pronounced ee-vawn, not eye-vin) is the quaternary antagonist of Cars 2 and one of Victor Hugo's workers.

Most tow trucks just look tough, but Ivan is really tough. From his front grille to his rear hook, he's built solid. What else would you expect from Victor Hugo's personal chauffeur? The rumor that he demolished a subcompact with one drop of the tow boom may sound preposterous, but it's absolutely true. Still, every tough truck has a weakness and for Ivan it's helping a pretty sports car with a flat tire. All she has to do is give a wink and a shy smile, and he's ready with "roadside assistance".

In Cars 2, Ivan is a blue tow truck who works for Victor Hugo. He is Victor's personal transportation, towing him place to place. He also serves as a bodyguard. During the film, Mater disguises himself as Ivan to infiltrate the lemon meeting being held in Porto Corsa to get info. Holley Shiftwell tases Ivan before this so he doesn't blow their cover. He later regains consciousness and captures Holley. When Mater was trying to get Lightning McQueen's attention in a crowd, the lemons grab him with Ivan taking his place. He was last seen near the end of the movie trying to attack McQueen only to be taken out by Mater and arrested in London with all the other lemon employers.

While Ivan doesn't appear in Cars 2: The Video Game, he appears as one of the skins for Mater.

Ivan is painted dark blue, with a red tow strap and bumper. He has a black grille as a mustache, chrome rims and amber lights on his roof.

"Alexander Hugo: "Gremlins. Man, those are some ugly cars. Look like someone stole their trunks!"
(Alex, Ivan and the other black Hugos laugh.)
Holley Shiftwell (Italian accent): Scusa tu mi tutti, signori (Everyone excuse me, gentlemen). "My grand-a father has-a broken down. If-a one of-a you would help, I would be so thankful."
Ivan: "Sounds like you need some roadside assistance."
Alexander Hugo: "She was talking to me, Ivan!"
Ivan: "Oh, really? Prove it!" (hits Alexander Hugo)
Holley Shiftwell (still Italian accent): "No, no, no! Don't-a fight over me. Signore Tow Truck, per favore.""
—Alexander Hugo, Ivan and the other black Hugos meet Holley, who they don't know is a spy., [[{{{3}}}]] 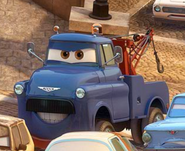 Ivan having been tasered by Holley.

Ivan greeting Lightning McQueen, taking Mater's place so the Lemons can capture him.

Ivan before being attacked Mater.