McPillar competes in the 2016 Piston Cup season in Cars 3. He enters the season as a mid-season replacement for the previous Tow Cap racer, Jack DePost. In the Los Angeles 500, he starts in 4th place. For the beginning of the race he manages to keep 4th place. At some point he gets overtaken by Jackson Storm, Lightning McQueen, and other Next-gens such as Herb Curbler and Daniel Swervez. J.D. can be last seen when he is taking a pit stop with McQueen and Storm. Early on in the Florida 500, he can be seen being reported by an RSN reporter next to Ed Truncan and the next-gen Gask-its. In the race, he starts in 8th place and manages to stay in the top ten. He does not crash due him being far up in the pack. Eventually Cruz Ramirez and Paul Conrev pass him at some point and is seen racing besides Aaron Clocker then overtakes him and passes H.J. Hollis. Later they both pass him again along with Cruz. Somehow he manages to stay above Paul Conrev. He finishes in 8th place. 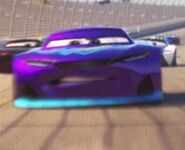 J.D. in the simulator
Add a photo to this gallery

Retrieved from "https://worldofcarsdrivein.fandom.com/wiki/J.D._McPillar?oldid=103882"
Community content is available under CC-BY-SA unless otherwise noted.