James Cleanair is a Piston Cup racer who bears the sponsor of Vitoline, a special fuel additive for older cars. Racing under command of Vitoline Crew Chief, he works alongside the Vitoline Pitty. Brick Yardley and Chase Racelott also race for the Vitoline team.

He is a Husker Morocco that is painted pale green, with a white trunk and spoiler. He has the Vitoline logo on his hood, as well as on his trunk, and the number 61 painted in white on his doors and roof. He has black rims.

In Cars, James is one of the thirty-six race cars that is competing in the Dinoco 400, the final race of the 2005 Piston Cup season, at the Motor Speedway of the South. However, James ends up receiving damage after being involved in a large wreck created by Chick Hicks, in an attempt to distance himself from Lightning McQueen. During said wreck, he collided with Haul Inngas and Billy Oilchanger. Despite his injuries, James continues racing, but does not win.

Between the events of Cars and Cars 3, James retires with Brick Yardley becoming the Vitoline racer and given 24 as a new team number. 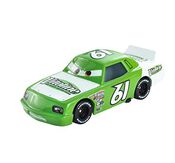 Retrieved from "https://worldofcarsdrivein.fandom.com/wiki/James_Cleanair?oldid=165973"
Community content is available under CC-BY-SA unless otherwise noted.