Jerry Drivechain is a member of the Tank Coat racing team. He is a pitty, doing tasks such as changing tires during pit stops and moving supplies after races. He is a 2003 Nemomatic Forklift, with a pink livery.

In Cars, Jerry attends the Dinoco 400 at the Motor Speedway of the South. During the race, he helps Eugene Carbureski when he comes in for a pit stop. After the race is over, when Lightning McQueen is driving back from Mack, Drivechain is seen catching tires and loading them up into the Tank Coat Hauler's trailer. 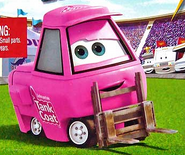 Retrieved from "https://worldofcarsdrivein.fandom.com/wiki/Jerry_Drivechain?oldid=179216"
Community content is available under CC-BY-SA unless otherwise noted.