Jimmy Cables[1] is a professional race car who competed in the Piston Cup Racing Series prior to being replaced by Flip Dover. He raced for the Intersection team, bearing the number 00.

In Cars 3, Jimmy competes in the 2016 Piston Cup season, alongside many other traditional stock racers. However, after Jackson Storm's performance sparks interest in next-generation racers, Piston Cup teams begin firing and replacing their old racers with new, more capable next-gen models, and Intersection fires Jimmy and replaces him with a next generation racer named Flip Dover.

Jimmy Cables is kind and takes his racing career seriously, usually seen finishing in the top 5 at the begining of the movie. He's also a great racer/competitor 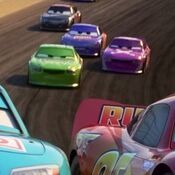 Retrieved from "https://worldofcarsdrivein.fandom.com/wiki/Jimmy_Cables?oldid=154026"
Community content is available under CC-BY-SA unless otherwise noted.