Jonas Carvers[1] is a next-generation Piston Cup racer sponsored by No Stall. He entered the 2016 season after Todd Marcus either retired or was fired by No Stall. His racing number is 123 and he is a Next-Gen 2017 Race Car SA-3.

In Cars 3, Jonas competes in the 2016 Piston Cup season. He enters the season as a mid-season replacement for the previous No Stall racer Todd Marcus. He starts his career at the Gears and Glory 450, held at the Heartland Motor Speedway, and finishes in nineteenth place. In the Los Angeles 500, he is seen starting in sixteenth place next to Ryan Laney, and finishes in eighth place. In the Florida 500, Jonas starts in thirty-second place behind Rich Mixon. When Cam Spinner causes the wreck, he is involved in the wreck. Jonas restarts and finishes in thirtieth place. 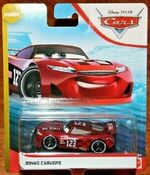 Retrieved from "https://worldofcarsdrivein.fandom.com/wiki/Jonas_Carvers?oldid=160888"
Community content is available under CC-BY-SA unless otherwise noted.