Kevin Shiftright is a Piston Cup racer. He races for Clutch Aid team, like Suregrip. He is an Axxelo Fission with a blue, white, and green livery. His racing number is 121. At some point between the events of Cars and Cars 3, he retires, and is replaced by Dino Draftsky.

In Cars, Kevin competes in the Dinoco 400 at the Motor Speedway of the South. When Chick Hicks causes a large crash, Kevin is caught in it, and he receives some damage, though he is able to continue racing afterward. During the last lap he was seen right behind the King and Chick and finished 4th behind the three-way tie. 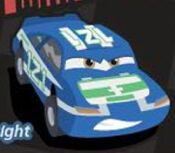 Kevin, Crusty and Ponchy in the crash

Manny, Kevin, Sage in the crash

Retrieved from "https://worldofcarsdrivein.fandom.com/wiki/Kevin_Shiftright?oldid=179289"
Community content is available under CC-BY-SA unless otherwise noted.