Gyoji referee
Kimura Kaizo is a sumo referee, painted purple with a black undercarriage and hat. He has white spots on his doors, black mirrors, a black grille, and chrome rims. According to Meet the Cars, he is a 2005 Shonosuke Matchfair G,[1] also resembling a 2003 Toyota bB (known as the Scion xB in the US). On his die-cast, his license plate says, "FSHBWL", which is also taken by Acer, Fred Pacer, Cruz Besouro, Carlo Maserati and Mel Dorado.

In Cars 2, Kimura is inspecting Pinion Tanaka and Kingpin Nobunaga's fight at the sumo arena in Tokyo, Japan. When Kingpin is taken down, he gives Pinion the knockout sign.

"Kimura is an accomplished calligrapher and is one of the most precisely tuned SUVs you'll ever meet. It's rumored that he has never made an incorrect call in a sumo match—just another reason why the Japan Sumo Association is lucky to have Kimura-san as one of their top-ranked gyoji referees. He keeps the fight rolling along, calls a wrestler in or out-of-bounds, and when his gunbai war fan points, the winner has been chosen. No questions asked."[1] 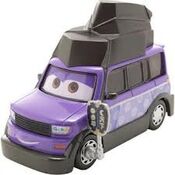