Kimura Kaizo is a sumo referee.

Kimura is an accomplished calligrapher and is one of the most precisely tuned SUVs you'll ever meet. It's rumored that he has never made an incorrect call in a sumo match- just another reason why the Japan Sumo Association is lucky to have Kimrura-san as one of their top-ranked gyoji referees. He keeps the fight rolling along, calls a wrestler in or out-of-bounds, and when his gunbai war fan points, the winner has been chosen. No questions asked.

Kimura is seen at Tokyo, supervising a fight between Pinion Tanaka and Kingpin Nobunaga.

Kimura is painted purple, with a black undercarriage and hat. He has white spots on his doors, and black mirrors. He also has a black grille and chrome rims.

Kimura is a professional sumo wrestling referee. He makes the calls, and no one can change his mind. 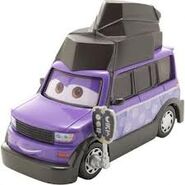 Retrieved from "https://worldofcarsdrivein.fandom.com/wiki/Kimura_Kaizo?oldid=45679"
Community content is available under CC-BY-SA unless otherwise noted.