Kingpin Nobunaga is a sumo wrestler.

As a professional Sumo wrestler at an arena in Tokyo, Japan, Kingpin Nobunaga is a gold-painted micro van who fights his fiercest matches when he’s wearing his lucky purple mawashi.

Kingpin is painted tan, with a black grille and grey bumper. He has chrome rims, and wears a purple mawashi.

He is modeled on a micro van.

Kingpin is a champion sumo wrestler, fighting for the entertainment of cars watching the event. 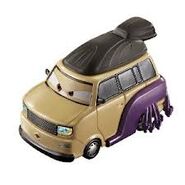 Retrieved from "https://worldofcarsdrivein.fandom.com/wiki/Kingpin_Nobunaga?oldid=37908"
Community content is available under CC-BY-SA unless otherwise noted.