The LJH 86 Special is a racing plane.

He attempts to qualify for the WATG Rally, but did not make it into the Top 5 to compete.

He also strangely appears in Sun Wing's tent when Dusty comments about Ishani's propeller while in the pit row at John F. Kennedy International Airport. However, he does not appear in there again after that.

The Special is scheduled to return in Planes: Fire & Rescue. He competes in a race of the Wings Around the Globe, when Dusty overtook him just before the finish line. 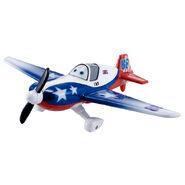 Retrieved from "https://worldofcarsdrivein.fandom.com/wiki/LJH_86_Special?oldid=150973"
Community content is available under CC-BY-SA unless otherwise noted.