"Grem: "Hey, Professor Z! This is one of those British spies we told you about!"
Acer: "Yeah! This one we caught sticking his bumper where it didn't belong!"
Professor Z: "Agent Leland Turbo!""
—Leland Turbo's death got revealed., [[{{{3}}}]]

Leland Turbo was a British spy.

Leland Turbo, British Intelligence. He and Finn McMissile go way, way back together in the world of espionage, and they even trained together in the academy as new recruits. They were partners early in their careers and owe each other their lives, getting one another out of though spots many, many times. Clearly, Leland is not one to run from danger. In fact, he thrives on it... but this time it may end up costing him more than he thinks.

He is seen in the beginning of Cars 2 in a room on one of the Lemons' oil rigs, sending Finn a video message that he has uncovered crucial information about their destructive camera device. Leland stops recording his video when he sees the shadows of Grem and Acer about to enter the room. When Finn arrived at the rally point, he tried to contact Leland saying that he had arrived but Leland doesn't say anything and all Finn gets is static from the other end. All of the sudden, Grem shows Professor Z a compacted red metal cube, revealing (as Finn watches) that they have crushed the spy after discovering him.

According to his official biography, Leland's model is the fictitious 1965 Runwell-Type SR. His design suggests the early-1960s hardtop Jaguar E-Type and the Austin Healey roadsters from the same era. As such, he largely resembles David Hobbscap and other E-Types appearing in the film.

When Leland's remains are shown, his license plate is revealed as 63 TRBO, a likely reference to the year Jason Isaacs was born. It also includes most of his surname, excepting the "u".

Leland was a British spy, before his death.

"'Leland Turbo: (After Pixar Animation Studios logo, static is heard) "This is Agent Leland Turbo. I have a flash transmission for Agent Finn McMissile.(Walt Disney Pictures Presents) Finn, my cover's been compromised. Everything's gone pear-shaped. (A Pixar Animation Studios Film) You won't believe what I found out here. This is bigger than anything we've ever seen, and no one even knows it exists! Finn, I need backup, but don't call the cavalry, it could blow the operation. And be careful. It's not safe out here."
Acer: "Let's go!"
Leland Turbo: "Transmitting my grids now. Good luck!" (shows Cars 2 logo)"
—Leland Turbo sending Finn McMissile a message (his only lines in the movie)., [[{{{3}}}]] 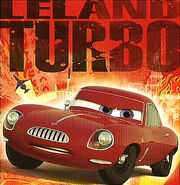