Lea "Lil' Dipper" Levine is a member of the Smokejumpers, an organization working to fight wildfires. She is also Dusty's biggest fan.

Outgoing and spirited super scooper Dipper is skilled at skimming lakes, scooping up more than 1600 gallons of water and dousing angry fires. A former cargo hauler from Alaska, Dipper is an avid air racing fan with a major crush on headline racer Dusty, so she’s head-over-wheels with excitement when the new SEAT shows up at Piston Peak.

In Planes: Fire & Rescue, Lil' Dipper greets Dusty with excitement when he arrives at Piston Peak National Park, as she claims to be his biggest fan and develops a crush on him.

Lil' Dipper is exciteful and kind, especially to Dusty, who she has an obsession with.

Lil' Dipper is a Super Scooper.

Lil' Dipper is a member of the Smokejumpers, flying over the wildfires, dropping water to put them out. 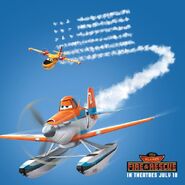 Add a photo to this gallery
Retrieved from "https://worldofcarsdrivein.fandom.com/wiki/Lil%27_Dipper?oldid=58053"
Community content is available under CC-BY-SA unless otherwise noted.