Lug and Nutty are the two pitties that appeared as Mater's forklift assistants and helpers. Like him, they have buck teeth. They also appear at the end, cleaning up the cans that Mater landed in at the start of the short.

Each is painted blue and white, with red stripes on their doors. They both have blue rims with white stars on them, and red crane arms.

Lug and Nutty are 2003 Nemomatic Forklifts.

Lug and Nutty were Mater the Greater's assistants. It is unknown what happened to them afterwards. 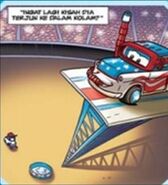 One helping Mater
Português do Brasil
Community content is available under CC-BY-SA unless otherwise noted.
Advertisement