"Luigi follow only the Ferraris."
—Luigi to Lightning McQueen after learning that McQueen doesn't race with Ferraris.

Luigi is an Italian tire salesman, who lives in Radiator Springs, managing his very own shop with his assistant, Guido.

Luigi runs the local tire shop in Radiator Springs, Luigi's Casa Della Tires. If you're gonna be driving through this world, why not look good doing it? That's Luigi's motto. Cars may not get to choose their body type, but they all have a choice when it comes to the tires they wear. Luigi offers the finest selection of tires west of the Mississippi, and Luigi's Casa Della Tires is known far and wide for its impeccable service, competitive prices, and of course, its very stylish proprietor.

Luigi is a huge fan of Ferrari Racing and is so happy when Ferrari Racer Michael Schumacher shows up at his shop wanting tires in the end.

Luigi appears, along with the other residents of Radiator Springs, in the short, Mater and the Ghostlight.

Radiator Springs resident Luigi is a big-hearted, gregarious and excitable Italian Fiat 500. A tire virtuoso and owner of Luigi's Casa Della Tires, he and his sidekick Guido join Lightning and Mater as members of Team Lightning McQueen for the World Grand Prix. Luigi is also an aficionado and fanatic for all things Italian, and is particularly enchanted with Ferrari race cars. When the competition takes the team to his hometown of Porto Corsa, Italy, Luigi is over the moon to introduce the Radiator Springs crew to his charming village and the wonderful ways of Italy. His family welcomes the gang from Radiator Springs in a big, passionate Italian way: Amore!

In Cars Land, Luigi and Guido have their own ride at Luigi's Casa Della Tires called Luigi's Flying Tires. In the ride, the guests will get into their own fettucini tires. When Guido turns on the air compresser, air will come out of the holes, and the tires will float in the air. There are also some beach balls with the colors of the Italian flag in the ride, and Italian music will play.

Luigi is big-hearted, gregarious and excitable, and also has a very large liking of Ferrari racing.

Luigi is painted yellow, with chrome rims and a sunroof that is modified to look like hair, and also may be by Vinyl Toupee.

"On your marks, get set, uno for the money, due for the show, tres to get ready, and cuatro to... I can't believe it. Go!"
—Luigi starts the race between Lightning McQueen and Doc Hudson. 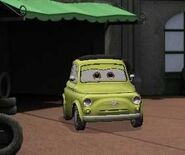 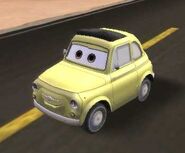 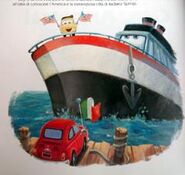 Luigi with his mother

Luigi with his friends in a comic 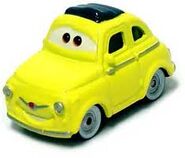 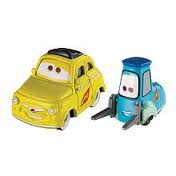 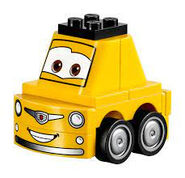 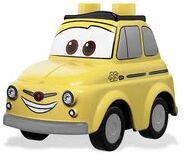 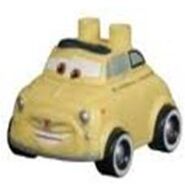 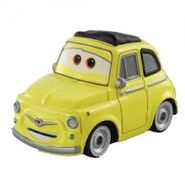 Retrieved from "https://worldofcarsdrivein.fandom.com/wiki/Luigi?oldid=55112"
Community content is available under CC-BY-SA unless otherwise noted.