Mac iCar is a Piston Cup race car who raced for the Apple team. He is an Axxelo Fission (a model that resembles the real life Honda S2000) that is painted white, with the Apple logo on his hood, and the number "84" painted in grey on his doors and roof. He retires some time later in Cars 3 and is replaced by J.P. Drive.

In Cars, Mac is one of the thirty-six race cars that competes in the final race of the Piston Cup season at the Motor Speedway of the South.When Chick Hicks causes the big crash, he is involved in the wreck. He spends most of the race behind Dale Earnhardt, Jr. in around the thirtieth position. At one point in the race, The King overtakes him, and Mac finishes the race in 10th position. In Cars 3, he competes in the 2016 Piston Cup season. However, when Jackson Storm and new next-gen racers were taking over, he gets fired and replaced by J.P. Drive before the race at the Rustbelt Raceway. 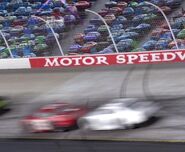 Retrieved from "https://worldofcarsdrivein.fandom.com/wiki/Mac_iCar?oldid=141632"
Community content is available under CC-BY-SA unless otherwise noted.