Mach used to be one of the world's most successful production sports-car racers. He found winning success on the sands of Baja, in European rallies, and in sports-car club races around Japan. When Mach got the offer to be a Le Motor crew chief, he realized it was time to start training and shaping Shu Todoroki into a World Grand Prix champion!

In Cars 2, he is seen in the Japan race telling Shu something in Japanese. He is seen after Bruno Motoreau and before Giuseppe Motorosi.

Mach is modeled as a 1970 Nissan Fairlady Z. 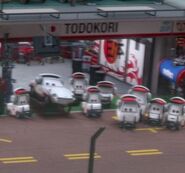 Add a photo to this gallery
Retrieved from "https://worldofcarsdrivein.fandom.com/wiki/Mach_Matsuo?oldid=140149"
Community content is available under CC-BY-SA unless otherwise noted.