Mack began as a delivery truck, hauling crates cross-country. He was good friends with Gray, who was able to get him a Piston Cup job as a team hauler.

Endless days on the road and sleepless nights criss-crossing the country... For some this life would quickly grow old. But not Mack. No sir. Mack knows how important his role is. He's driving Lightning McQueen, the world's fastest racecar. He's part of a team, and everybody knows there's no I in team, just like there's no I in Mack.

By 2005, in Cars, Mack was assigned his racer and team - Rust-eze Racing, with the spoiled and self-centered Lightning McQueen. Although McQueen didn't treat him that well, Mack was still loyal and kind-hearted to him. Mack has various lines in Cars, despite him only having two in the sequel.

By 2006, in Cars: The Video Game, Mack and the new McQueen are very good friends and are still working together in the Piston Cup. He appears in part 2 of the end-scene for the Radiator Springs Grand Prix event, where he tells Lightning that he should get back into shape for racing before the next season starts. He then appears in all the cut-scenes for the Piston Cup races. In High Speed Heist, Mack has now proven himself to be a little easy to distract, as the Delinquent Road Hazards make him fall asleep on the highway and rob him of McQueen's racing gear. Then Mack reports to Sheriff that he was robbed, and Sheriff tells Lightning about the robbery. Then in the cut-scene for Los Angeles International Speedway, Mack was kind of sad, because it was the end of the season, and he was gonna miss the season.

He doesn't play a big role in Cars: Race-O-Rama. He appears in Mack Track Challenge, where you must use his trailer to do a big jump. Mostly in the game, he is the transporter that helps you get to different places in the game.

Mack is Lightning McQueen’s trusted long-haul driver, crisscrossing the country from race to race, always with a smile on his grill. After dropping Lightning off in Radiator Springs with his fourth Piston Cup championship trophy, Mack sets off with the rest of the pit crew for a well-deserved vacation. Who knew that Lightning would end up jetting off to a race around the globe in the World Grand Prix?

By 2011, Mack is still working at the Piston Cup, continuing his occupation as Lightning's team hauler. In Cars 2, he is briefly seen at the beginning when Lightning goes back to Radiator Springs, where he says one of his only 2 lines. He doesn't accompany him to the World Grand Prix due to being on vacation. At the end, he talks with Lizzie and says the other of his only 2 lines of the movie. Those only 2 lines that he had are "Oh, these best friend greetings all get longer every year," and "Oh, those two are perfect for each other."

Mack is loyal and kind-hearted, even to cars who are a little mean to him. He is also easily distracted, as proven on the Interstate 40, twice.

Mack's cab is painted red, and has a grey grille with his name on it. The trailer he hauls around is red and grey, with a picture of Lightning McQueen, the Rust-eze logo, the number 95, and Lightning's name painted on each side. He has chrome rims.

Mack is based off of a 1980s-era Mack Super-Liner semi cab, with a compatible trailer.

His license plate is RUSTEZ3.

Formerly a delivery truck, Mack now has a profession of transporting Lightning McQueen to each of his Piston Cup races.

Mack has often been released as playsets.

"What? Did I forget to wipe my mud flaps?"
—Mack, after everyone gasps when they find out Lightning is missing.

Lizzie: "A valuable dent? She's as crazy as Mater!"
Mack: "Oh, those two are perfect for each other."
—Lizzie and Mack, hearing that Holley Shiftwell wants to keep her dent. 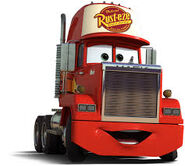 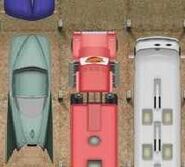 Mack in The World of Cars Online 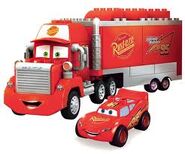 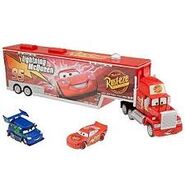 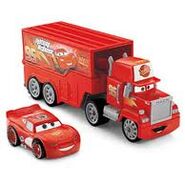 Shake 'N' Go
Add a photo to this gallery
Retrieved from "https://worldofcarsdrivein.fandom.com/wiki/Mack?oldid=55091"
Community content is available under CC-BY-SA unless otherwise noted.