Marco is a jet.

As a twin engine jet fighter, Marco gets to go on many dangerous and exciting missions. His favorite missions of all are the crowd pleasing, low altitude Piston Cup fly overs. It's a chance for him to mix it up with the public he defends, but unfortunately when zipping by at 500 mph, he only gets to watch the race for about 1.2 seconds at a time.

In Moon Mater, Marco is seen with Stu Bop being transported by an aircraft carrier.

Marco is painted gray, with a black logo on his helmet. 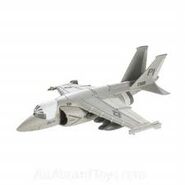 Diecast
Add a photo to this gallery
Retrieved from "https://worldofcarsdrivein.fandom.com/wiki/Marco?oldid=162801"
Community content is available under CC-BY-SA unless otherwise noted.