Mark Wheelsen is a security officer.

He is seen in London, protecting the Queen. He is one of the policemen (although it cannot be said which one) who try to protect the Queen from Mater as he lands on the Queen's platform with a bomb implanted on him. Mark later helped arrest Miles Axlerod.

Mark is painted one main shade of gray, with a green and blue checkered pattern on his doors. He has chrome rims, as well as the word "POLICE" written in white across the front of his hood.

Mark is a Ford Mondeo.

Mark is a security officer stationed in London, like Doug Speedcheck. 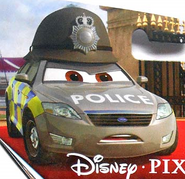 Add a photo to this gallery
Retrieved from "https://worldofcarsdrivein.fandom.com/wiki/Mark_Wheelsen?oldid=151830"
Community content is available under CC-BY-SA unless otherwise noted.