View source
watch 01:32
Wiki Targeted (Entertainment)
Do you like this video?
Play Sound

One morning, Mater was driving through Radiator Springs to deliver his letter to Santa Car. He meets Chick at the mailbox, who teases him for believing in Santa. Lightning witnesses this and suspects that Chick is up to mischief. Things get worse when Sheriff reports that gas stations down Route 66 and at the post office are being robbed of their fuel, which is preventing mail trucks from delivering Santa's letters. This makes Mater start to worry about Christmas being ruined, so he decides to go to the North Pole to deliver the letters himself, but when he tries to refuel at Flo's, he and Flo find out that they were robbed too. Luckily, Fillmore still has a little of his Christmas brew left and decides to give it to Mater. Lightning, not wanting him to go alone, gets suited up with snow tires from Luigi and Guido and other snow gear from Sarge so he could accompany Mater on the journey. When the two cars were ready, they started their trip through the mountains, singing Christmas carols along the way.

Back in Radiator Springs, Sheriff makes plan to catch the thieves. Luigi and Guido would spy on them with Sally in charge of maps while Fillmore continue to make fuel. However, they find out that Fillmore was also robbed, so Sarge comes up with a back-up plan where he and Fillmore would share their remaining fuel with Luigi and Guido.

After a long and exhausting journey, Lightning and Mater make it to the North Pole, which they find beautiful. They meet up with Santa Car and deliver the letters. However, Santa announced that he might have to cancel Christmas as the reindeer that fly him around the world using a secret flying fuel were stolen. Mater suddenly remembered seeing Chick and his friends acting suspiciously at Flo's and he and Lightning conclude that Chick stole the reindeer to give himself an advantage in races. Santa came up with a plan where Mater and Lightning would have their tanks filled up with the flying fuel and fly him back to Radiator Springs.

In Radiator Springs, Luigi and Guido spot Chick and his friends making fuel with Fillmore's supplies with Santa's reindeer trapped in a cage. Boost and Snot Rod capture them and tie them up in front of Chick, who tells them his plan of using the flying fuel to stop losing to Lightning in the Piston Cup. At that moment, Mater, Lightning, and Santa arrive back as Chick flies away with Lightning chasing after him. The residents of Radiator Springs also show up to free Luigi, Guido, and the reindeer. As Chick continued to fly, he takes a turn too fast and crashes into the cactus patch. Mater arrives with Doc, who tells Mater to tow Chick out and to the impound.

Everyone goes back to Flo's to celebrate the capturing of the fuel thieves. Before Santa leaves, he offers Mater the opportunity to help him with his Christmas run, which Mater gladly accepts. 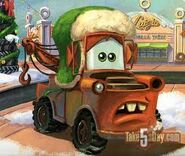