Matthew "True Blue" McCrew is a fan of Piston Cup racer Strip Weathers. He is a Brawny Motor Co. Leeway GT that is painted a purplish color. When rooting for his favorite racer, he sometimes holds a blue King flag on his left mirror.

"Mathew "True Blue" McCrew has been a King fan from the first time he came off the production line. In fact, everything in Mathew's house is painted King Blue, including the light bulbs. Because for Mathew, being a King fan isn't reserved for race day, it's a way of life."[1] 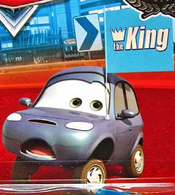 Retrieved from "https://worldofcarsdrivein.fandom.com/wiki/Matthew_McCrew?oldid=152117"
Community content is available under CC-BY-SA unless otherwise noted.