Max Schnell is a character in Cars 2.

Max Schnell started as a humble production sedan from Stuttgart, Germany. An avid amateur racer, Max would practice alone in the back roads of the dense Black Forest—a trek that eventually caught the eye of a racing team owner. Soon Max was on a professional circuit, bearing the #4, and as his horsepower increased, he converted himself to carbon fiber, dropping his weight and getting into prime racing shape. He’s won more races at Motorheimring than any other World Torque Champion League car in history. A naturally brilliant engineer, he used logic and analytics to refine his build, and plans to approach the World Grand Prix in the same perfectly calculated manner.Max has a massive German flag on the top of him.Max was the third and the last car thats happaning motor exbloding in the Tokyo race.In the Porto Corsa race he along with Miguel Camino crashed into Shu Todoroki.After time comes Raoul CaRoule with Rip Clutchgoneski and crashed into Max.Max was fixed in the London race and raced into the 5th position behind Miguel Camino and Lewis Hamilton.In the Radiator Springs grand prix Max was seen follow Nigel Gearsley to the 7th position. 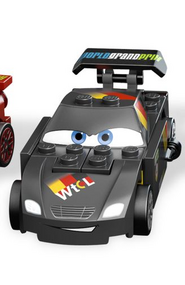