Start a Wiki
watch 01:27
The Loop (Movies)
Do you like this video?
Max Schnell is a German racer.

Like all World Grand Prix racers, Max Schnell participated in all three races of the competition as well as the Radiator Springs Grand Prix. In Cars 2, he was first seen at the party in Tokyo with the other racers. Max's performance in the W.G.P. was really good. Max went up to the third position on the dirt section followed by Nigel Gearsley in Tokyo, but started falling behind afterwards. And at the beginning of the Tokyo race, he at first took the 1st position. But after time, he was passed by Francesco Bernoulli, Lightning McQueen, Carla Veloso, Shu Todoroki and Jeff Gorvette. He was the third race car to be nearly destroyed by the Lemons' camera, as his engine was blown by the machine near the end of the race. In the Porto Corsa and London races, he was seen both times following Miguel Camino from the 5th to 4th position. During the huge crash in Porto Corsa, he tries to brake before the pile-up. However, he fails and violently collides into Miguel Camino and Shu Todoroki. Soon afterwards, Raoul ÇaRoule and Rip Clutchgoneski crash into them. He apparently got fixed and raced in London, and then appeared at the Radiator Springs Grand Prix.

In Cars 2: The Video Game, Max appears as an unlockable playable character, available once access to Clearance Level 3 is granted. Surprisingly, Max has more power than speed, and is a medium weight.

In Disney Infinity, Max makes a cameo in one of the paintings inside of Ramone's House of Body Art.

He has purple paint, with the German flag design painted on his trunk and roof. He has the WtcL logo painted on his hood. He has gray rims, and a black spoiler with the World Grand Prix logo on it.

Max is a famous race car from Germany that also competed in the World Grand Prix.

In the German version of Cars 2, Max is renamed Sebastian Schnell, and voiced by Sebastian Vettel. He replaces Jeff Gorvette, and becomes the racer that, along with Lewis Hamilton, meets Lightning McQueen at the World Grand Prix welcome party. But Jeff Gorvette still appears in the races. 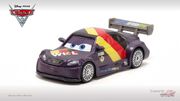 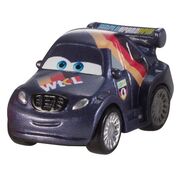 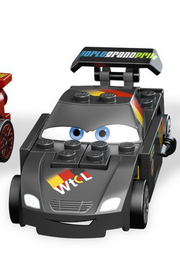 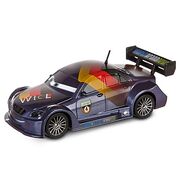 Neon Max
Add a photo to this gallery
Retrieved from "https://worldofcarsdrivein.fandom.com/wiki/Max_Schnell?oldid=66522"
Community content is available under CC-BY-SA unless otherwise noted.