Start a Wiki
watch 01:48
The Loop (Movies)
Do you like this video?
Meet the Cars is a book that features several cars and their descriptions from the first Cars movie. It features around 100 characters from the film, along with their description and model. It is partially based on the Car Finder game, as most of the information is copied over. 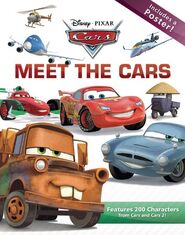 The second updated version (2017)
Add a photo to this gallery
Retrieved from "https://worldofcarsdrivein.fandom.com/wiki/Meet_the_Cars?oldid=151070"
Community content is available under CC-BY-SA unless otherwise noted.