Michael Rotor was a next-generation sports car, that was a racing driver who, around the late 2010s, competed in the Piston Cup Racing Series with number 39 for View Zeen. He joined the team in 2017.

Michael Rotor was a high-tech next-generation sports car that lived in the United States. He was a racing driver, who, in the late 2010s, had competed in the Piston Cup Racing Series for the View Zeen team with the number 39. He joined the team in 2017 as he was seen at the Florida 500 first. He replaced the pervious View Zeen racer, Buck Bearingly. He competed in the 2017 Florida 500 race at the Florida International Super Speedway, where he started from the eleventh position.

Michael is a high-tech next-generation sports car with Lightyear tires. His eyes are green. He has blue livery with yellow stipes on the border of his hood and spoiler as well as on his sides. He has a yellow number 39 on his sides and the roof and the logo of View Zeen on his hood, sides, spoiler and back. His rims are black. 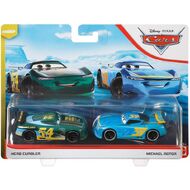