Miguel is a Brazilian racer competing in the Wings Around the Globe.

In Planes, Miguel first appears at the Wings Around the Globe pit row. While there, he asks if El Chupacabra's name is the monster that "siphons fuel from small vehicles" (the car equivalent of the legendary monster sucking blood from small animals). El Chu then answers that it is just a stage name designed to strike fear into the hearts of his opponents. Miguel is then seen in many shots of the racers throughout the movie. He gives Dusty a starter generator when he got damaged during a storm over the Pacific Ocean.

Miguel is painted white and green with Brazil's flag and Portuguese name. His racing number is #16. 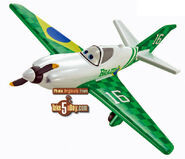 Diecast
Add a photo to this gallery
Retrieved from "https://worldofcarsdrivein.fandom.com/wiki/Miguel?oldid=57167"
Community content is available under CC-BY-SA unless otherwise noted.