Miguel Camino is a Spanish racer.

Spain's most renowned, admired and captivating car is Pamplona’s Miguel Camino. He first caught his home country’s attention by participating in the infamous Running of the Bulldozers. His flair, style and speed as a toreador in the dozer ring has inspired a generation of young bulldozer fighters, and soon that same speed and verve turned headlights of fans and competitors alike on the Grand Touring Sport racing circuit. Bearing the #5 and the fiery colors of the Spanish flag, Miguel Camino is hoping to race his way into more hearts at the World Grand Prix.

In Cars 2, Miguel Camino is the number #5 race car in the World Grand Prix. He blew out in the first part of the Tokyo race, among two others. He was the first racer zapped by the Lemons' machine during the race in Tokyo, and he went into the pits. Brent Mustangburger says "Very unusual, Darrell. He's been so consistent all year." During that race, his pit was between Lightning McQueen's and Nigel Gearsley's. Comparing with the not really good performance from him in the Tokyo race, he was much better in the Porto Corsa race. And in the London race, he was very close to passing Francesco Bernoulli to the 2nd position. Camino has no speaking lines, and is technically a minor character, despite the fact that he is a really common choice for merchandising. In the Italy race, he is the 4th car to get damaged, as he makes sparks with Shu Todoroki, and gets hit by Max Schnell. However, he got fixed, and was able to race in London. When the race started, he was in third place. Then he raced in Radiator Springs.

In Cars 2: The Video Game, Miguel reappears as a playable race car. This is also the only time he speaks.

Miguel is painted dark yellow, with various colors painted all over his body. He has red designs on the bottom of his doors, as well as a black star next to his number "5". On his hood, he has Spanish designs colored red, black and orange. He has a large black spoiler, and chrome rims.

Miguel is a famous race car, located in Pamplona, Spain. He competed in the World Grand Prix among several other world-famous champions. 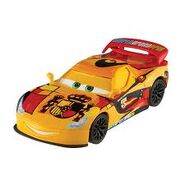 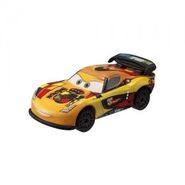 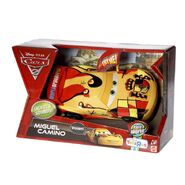 Miguel's lights and sounds car
Add a photo to this gallery
Retrieved from "https://worldofcarsdrivein.fandom.com/wiki/Miguel_Camino?oldid=54466"
Community content is available under CC-BY-SA unless otherwise noted.