Mildred Bylane was a car that worked for United Service Organizations.

Mildred Bylane was a car that lived in the United States. She worked for United Service Organizations. In summer of 1943, while in USO publicity tour on Route 66, she passed through town of Radiator Springs, Arizona, United States. While being there, accidentally swerved into a bed of flowers from where she got rescored by firefighter Red. At the end of the summer, her work made her go oversees. While leaving the town, she gave Red a single rose to remember her by. Red has kept the flower and has been carring for its descendants ever since. She later visited Radiator Springs at least once. During one of her visits she bought tyres at Luigi's Casa Della Tires store.

Mildred Bylane was a 1944 Hollismobile Driftwood with tan livery with gray patches on her sides. She had green eyes. Her registration plate number was 2769. 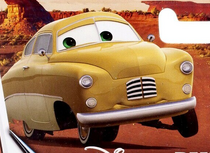 Retrieved from "https://worldofcarsdrivein.fandom.com/wiki/Mildred_Bylane?oldid=183537"
Community content is available under CC-BY-SA unless otherwise noted.