Miles Axlerod is the secondary antagonist and later the true main antagonist of Cars 2. He was a rich oil baron, before his arrest in London for destroying the climax of the World Grand Prix, his own scam of an event.

Axlerod is a former oil baron who has sold off his fortune, converted himself into an electric vehicle and has devoted his life to finding the renewable, clean-burning energy source of the future — ultimately discovering what he believes is the fuel everyone should be using. Axlerod is also the host of the World Grand Prix, a three-country race he created that attracts the world’s top athletes to promote his new clean burning fuel, Allinol.

Though at first Professor Z appears to be the main antagonist, it is revealed near the end of the film by Mater that Axlerod is actually the antagonist. His supposed "alternative fuel" was actually gasoline engineered to expand if hit with an electro-magnetic pulse, and was Professor Z's part of a plot to turn the world against alternative energy and have them rely on gasoline, bringing profits to the lemons and himself due to the fact they owned the largest untapped oil reserves in the world. It is unknown what happened to Axlerod after he was revealed to be the main antagonist, but it is assumed that he was arrested and sent to prison.

Charming as he seems, Miles is a villain. He is evil and rude. Miles is also clearly a smart thinker, as he had thought the entire plan to get rid of Allinol through, as he set everything up to make him look like an innocent car. At the end, he was proven to be the villain.

Miles is painted dark green, with chrome rims and a black roof. He has blue eyes, and his paint scheme matchs that color.

Miles is modeled on a modified Range Rover L322.

His license plate reads ALT NRG, an abbreviation of "alternative energy". However, before his "electric conversion" (ultimately a lie), he does not appear to have a license plate at all.

—When he was leaking oil and blamed Mater for it. 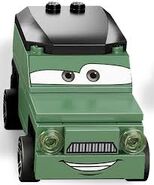 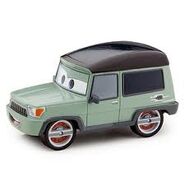 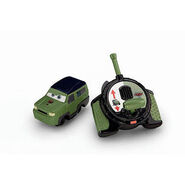 Geotrax
Add a photo to this gallery
Retrieved from "https://worldofcarsdrivein.fandom.com/wiki/Miles_Axlerod?oldid=51129"
Community content is available under CC-BY-SA unless otherwise noted.