Minny is a van who enjoys traveling.

Mini and her husband Van love to go out and see the world. Unfortunately they rarely see their exit. Getting lost on vacation has become somewhat of a tradition for the couple. Mini enjoys the unplanned detours. They allow her to see interesting places and folks that she would never have planned on visiting. She just wishes that her husband could enjoy that time to stop and smell the roses -- and if not, then at least stop and ask for directions.

Minny is the wife of Van. They were first seen driving towards Radiator Springs while looking for an on-ramp to Interstate 40. She tells Van that maybe they should ask for a map, but he says he has a GPS and never needs a map again. Minny mentions that Van did the same when they were heading up to the "Crazy Days" (a parody of Derby Days) in Shakopee. When Sally tells them that she has a map inside the Cozy Cone Motel (she said this to get them to stay), Minny suggests that Van should read the map. Van says "I don't need a map! I have the GPS." When they were about to leave, Lizzie puts a sticker on Van's bumper as something to remember the residents, and Sally says to them to tell their friends. After Lightning McQueen begs Van and Minny to call for help, they just stand for a few seconds of silence. Then their car alarms go off, and they just leave the town (they dismissed McQueen's plea as madness).

In a post-credits scene, they are lost in the middle of the desert still looking for an on-ramp. They are covered in dust and had tumbleweeds stuck to their tires (as well as inside Van's luggage carrier). Minny arguably asks Van if they can ask someone for directions, but Van, almost driven to insanity, still refuses and says that there is an on-ramp close ahead.

Minny appears near the end of Cars 2 with her husband Van. She listens to Mater's story about being a spy, and states that she likes it. Van however didn't believe it until Holley Shiftwell arrives to confirm it. Later, Minny and Van were seen attending the Radiator Springs Grand Prix.

In Spinning, Minny makes a cameo in the crowd watching Guido perform his tricks with a sign.

Minny also appeared in the 2011 Target commercial. Mater calls her a "mom on a mission", which implies that she and Van may have at least one (so far unseen) child.

Minny is painted bright purple. She has white mirrors and rims.

According to Car Finder, Minny is a Chauncey Motors Cavalcade Touring 200 HP 3.8-Liter V6. She is also based on a 1996 Dodge Caravan.

Van and Minny lost in the desert

Minny in Cars 2, with her husband Van.

Minny in the 2011 Target commercial. 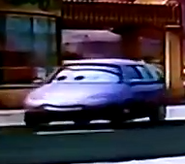 Add a photo to this gallery
Retrieved from "https://worldofcarsdrivein.fandom.com/wiki/Minny?oldid=52400"
Community content is available under CC-BY-SA unless otherwise noted.