Miss Fritter is a demolition derby legend with an intimidating appearance. She is an I.C.U. School Bus Type C[2] who has "smoke stacks of doom", and a collection of license plates retrieved from her victims. Her design is based on that of a school bus, with a razor blade in place of a typical bus' stop sign. Her racing derby number is 58.[1]

Miss Fritter was a school bus on her former home, Lower Belleville County.

In Cars 3, Miss Fritter is one of the participants in the demolition derby at Thunder Hollow Speedway. She is an undefeated Crazy Eight champion in the movie. She meets Lightning and Cruz in disguise after they enter the event by mistake. She also gives them nicknames. At one point, she takes out Taco before trying to take out Cruz. However, she is stopped by Lightning, making her tip on her side and losing her stop sign. She is eliminated when she rams into a "Fritter Time" sign, which falls over. Later, when McQueen's identity is revealed, she tells the press that she is a fan. She later watches the Florida 500 on TV and cheers on Cruz when she wins.

Miss Fritter is an unlockable playable character in Cars 3: Driven to Win. She is unlocked by completing the Master-level event Miss Fritter Battle Race.

She appears in the short Miss Fritter's Racing Skoool.[3] In the short, she appears in a commercial about her racing school, where she talks about how she felt driving for the Lower Belleville County Unified School District. However, she changed the direction of her life when she started her school. She also taught Dr. Damage, Faregame and Arvy how to race. At the end of the commercial, she laughs so loud that the sound wave causes Cruz Ramirez's Crazy Eight trophy to break again.

Miss Fritter makes a brief appearance in Lightning McQueen's Racing Academy following the race between Lightning and Chick Hicks in which she rams Chick away as comeuppance for cheating. 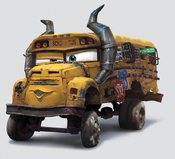 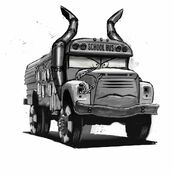 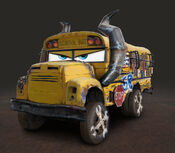 Retrieved from "https://worldofcarsdrivein.fandom.com/wiki/Miss_Fritter?oldid=151938"
Community content is available under CC-BY-SA unless otherwise noted.