Muir is an old steam locomotive who works at the Piston Peak National Park.

In Planes: Fire & Rescue, he is seen puffing along a train track as Dusty Crophopper flies past him.

He is predominantly black, gold and gray, and sports red wheels arranged in a 2-6-0 wheel arrangement. He has his name on the sides of his cab, the number 21 on his dome and smokebox, and the words "Piston Peak Railways" on his tender. 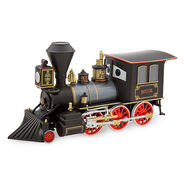 Disney Store
Add a photo to this gallery
Retrieved from "https://worldofcarsdrivein.fandom.com/wiki/Muir?oldid=56862"
Community content is available under CC-BY-SA unless otherwise noted.