Nelson Blindspot is a cameraman who has been employed by the Racing Sports Network for over twenty years. He has covered many racing events, including major Piston Cup races. He is an Emerycraft Inka with blue eyes and a green livery.

In Cars, Nelson appears doing camera work for both the Dinoco 400 and its subsequent tie-breaker event at the Los Angeles International Speedway. At both stadiums, he is stationed at the very top, next to Chuck Cables. As Marco, Stu Bop, and another fighter jet fly over the stadium, Artie orders Nelson to ready a specific camera angle for the television broadcast. 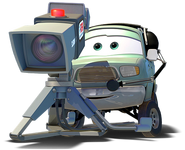 Die-cast model
Add a photo to this gallery

Retrieved from "https://worldofcarsdrivein.fandom.com/wiki/Nelson_Blindspot?oldid=191305"
Community content is available under CC-BY-SA unless otherwise noted.