World of Cars Wiki
Register
Don't have an account?
Sign In
Advertisement
in: Pages with reference errors, Trademarks, Sponsors,
and 2 more
English

To give cars energy (energy drink)

Cars
Nitroade is a high-energy drink for the cars. In the Piston Cup Racing Series, it is commonly used by racers in order to stay hydrated and maintain energy, and pitties will often provide their racers with it during pit stops.

It was seen sponsoring Racer 13. It is unknown if he was replaced by Aiken Axler after the race in Charlotte Springs Speedway.

In Cars, Aiken Axler and his team are competing in the Dinoco 400 at the Motor Speedway of the South. Additionally, "Petrol" Pulaski gives Winford Bradford Rutherford a can of Nitroade while he is taking a pit stop.

In Cars: Mater-National Championship, the Nitroade logo can be seen on barriers throughout the game's tracks.

In Cars: The Video Game, a racer named Joltsen races for the Nitroade team.

In Tokyo Mater, various advertisements for Nitroade can be seen on large screens in Tokyo throughout the duration of the short.

In The World of Cars Online, Nitroade was available as a sponsorship to paid members.

In Cars 2, a Nitroade advertisement can be seen at the World Grand Prix race in Tokyo, while Finn McMissile is racing through the streets in search of Mater.

In Cars 3, Phil Tankson and Tim Treadless bear the Nitroade sponsor throughout the 2016-2017 Piston Cup seasons. 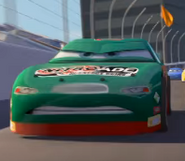 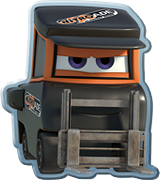 A Nitroade ad appearing above Haiki in Tokyo. 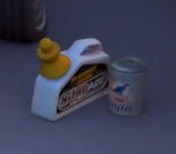 the Nitroade gas can next to Coriander Widetrack.