World of Cars Wiki
Register
Don't have an account?
Sign In
Advertisement
in: Sponsors, Cars: The Video Game Sponsors, Trademarks,
and 2 more
English

View source
watch 01:32
Wiki Targeted (Entertainment)
Do you like this video?
Play Sound

Advertisements for No Stall can be seen in “Cars: Mater-National Championship, Tokyo Mater, and Cars 3. The Piston Cup racing team that is sponsored by No Stall consists of racers Todd Marcus, Masterson and Jonas Carvers , crew chief Roman Dunes, various pitties such as Shirley Spinout, and transporter No Stall Hauler. 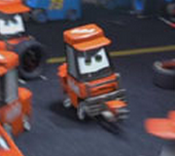