World of Cars Wiki
Register
Don't have an account?
Sign In
Advertisement
in: Events, Cars: The Video Game
English

This article is about the event. For the location, see Palm Mile Speedway.

In front of Mack

Boostin' with Fillmore
Luigi to the Rescue

Palm Mile Speedway is an event in Cars: The Video Game. It is the first Piston Cup race of the game, and the final event in Chapter 1. Lightning McQueen is the first playable character. Players can also race as Doc Hudson, Chick Hicks, and Darrell Cartrip. Although the King does not actually race as an opponent, the player can race as him.

The track is a simple oval, with turns that are not really banked.

The race is twelve laps around Palm Mile Speedway. There are twenty racers, and the five leading cars are McQueen, Lee Jr., Chick Hicks, Suregrip, and Hollister. Halfway through the race, there is a minigame as part of it in story mode, where the player needs to help Guido give Lightning a pit stop by pressing buttons on the controller. 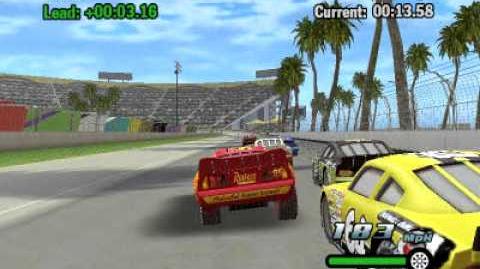