A Piston Cup is a trophy given to the one who wins the Piston Cup Racing Series.

Cars have been winning Piston Cups even before the 1950s. When the Hudson Hornet debuted in 1951, he won three trophies in a row, before his wreck. In 2005, the winner of the Piston Cup was Chick Hicks, which was also his first title as well, although most agreed he didn't deserve it. In 2006, Lightning McQueen won his first trophy. In the years to follow, Lightning was able to win three more cups. In 2010, the Piston Cup was renamed the Hudson Hornet Piston Cup to remember Doc Hudson, who had passed away in 2009.

The main use of a Piston Cup is for display on a shelf, windowsill, or another safe place where it can be viewed. It can also be used to hold smaller objects, such as pens. Chick Hicks displays his trophy when hosting his TV show and also as a means to gloat his championship that he won.

The Piston Cup is a gold trophy, with an empty area at the top, which can hold objects. Written on the front are the words Piston Cup, with black lining surrounding it. It stands on a black base, which has the name of the year the owner won it, as well as the name of the owner.

The Piston Cup trophy in Cars 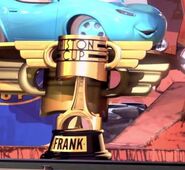 The Piston Cup as won by Frank in McQueen's nightmare. 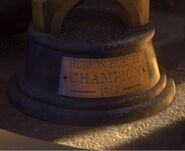